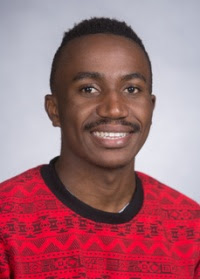 My research mostly focuses on doing galactic archeology with ultracool dwarfs (UCDS). UCDs are the lowest-mass objects (M<0.1 Msun; M, L, T, Y spectral types) in the Milky Way. Most galactic archeologists use bright F, G, K stars and/or giants to probe the formation history and evolution of our Galaxy, but UCDs present a potentially more enriching picture of Milky Way since they far outnumber these other “stars” in the Galaxy (~50% of all the stars). Some UCDs don’t fuse Hydrogen in their cores so they cool down with time as they radiate away their internal heat.

I discover distant (~1 kpc) UCDs in deep surveys, and run simulations that include to test assumptions about the initial mass function, star formation history, multiplicity statistics, Galactic structure and UCD evolutionary models. I also look for interesting populations e.g metal-poor “subwdarfs” that are old and will give us a clue about old stellar populations in the Galaxy. 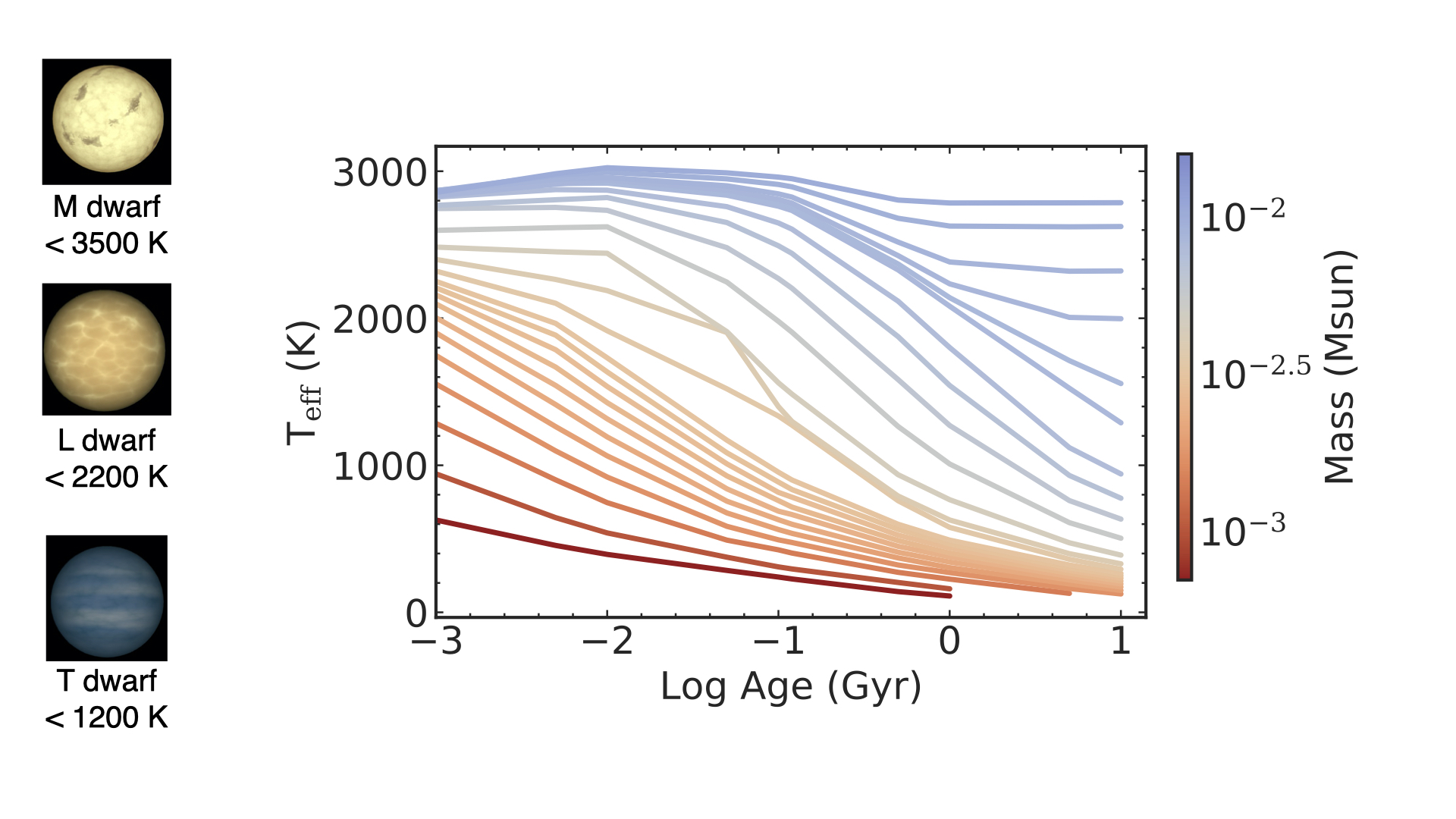 WISPS and 3D-HST use HST/WFC3 instrument to obtain photometry and low-resolution (R≈130) near-infrared spectra of more than 250,000 sources. These surveys were designed to measure star-formation in high redshift galaxies (z>2) by measuring red shifted emission lines. The observations are taken in “parallel” mode, meaning that WFC3 operates concurrently with another instrument, allowing pointings in multiple directions, primarily at high Galactic latitudes ( ≥ 20 deg).

The purpose of my study using data from these surveys is to identify a robust spectroscopic sample of UCDs at large distances from the WISPS and 3D-HST Surveys, and use Galactic structure and evolutionary models to constrain on the spatial distribution and age of the UCD thin disk population. 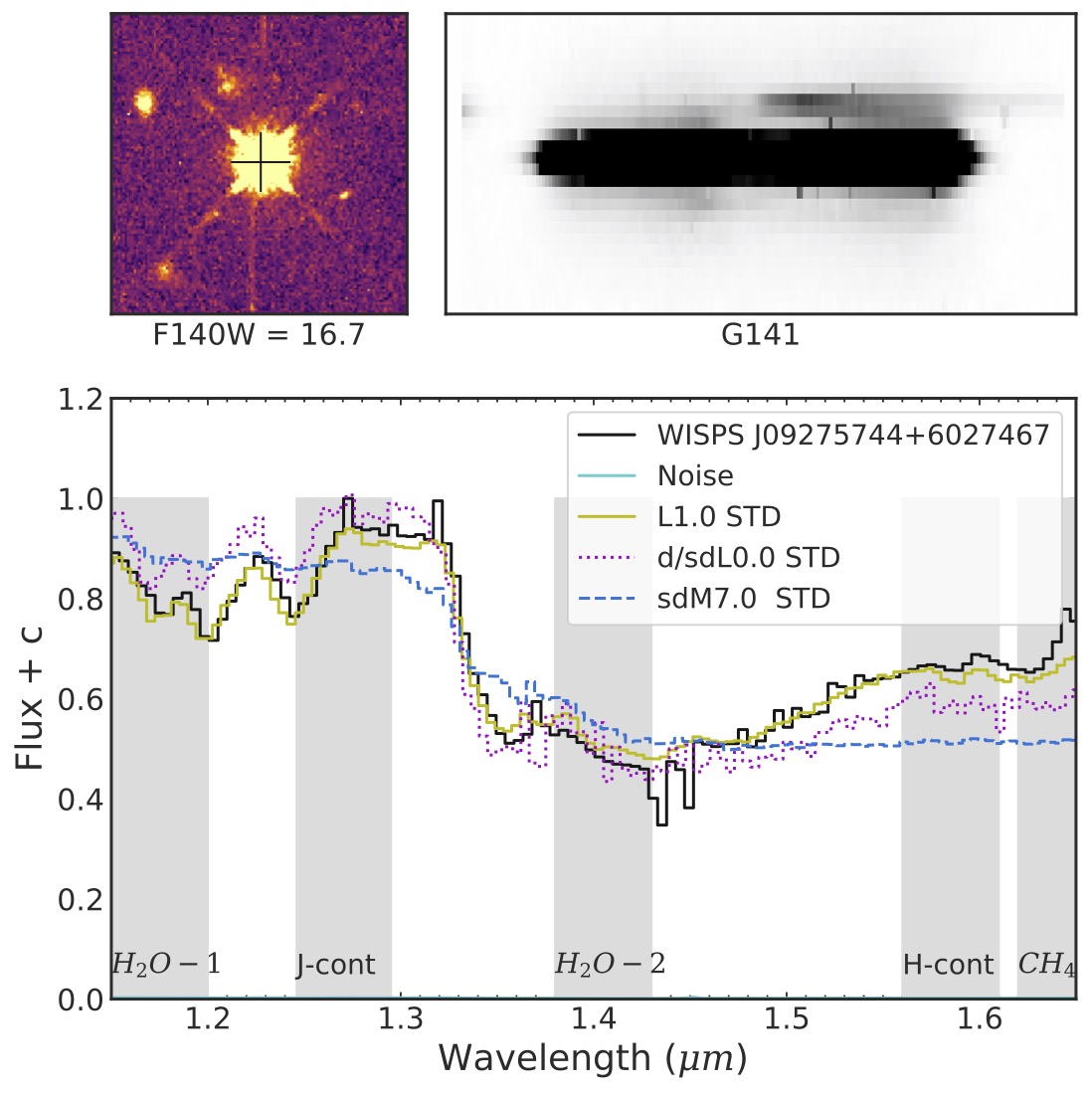 Top Left: Cutout from a processed image of an L dwarf in the WISP survey with the F140W filter (1.4 µm). Top Right: a 2D G141 (1.1-1.7 µm) spectrum of the same pointing. Bottom: 1D- Spectrum fitted to best-match spectral templates of dwarfs and metal-poor subdwarfs.

Predicting Yields for the Next Generation of Surveys

The next generation of wide-field surveys will detect millions of UCDs at distances up to ~10 kpc and will revolutionize the study of these objects as a Galactic population. The advances will be achieved by the next generation of survey facilities with greater sensitivities at longer wavelengths (e.g. SPHEREx to 5 µm, JWST to 28 µm), enabling studies of spectral features not previously explored. Multi-epoch data will also provide astrometric information that can be used to measure distances and isolate populations by their motions. Link to AAS poster

Predicting the science yields of these surveys requires predicting the UCD star counts and populations, and how they may vary based on different model assumptions. The purpose of this study is to evaluate the UCD yields for future surveys conducted with the James Webb Space Telescope, the Nancy Grace Roman Space Telescope, the Euclid Observatory, the Vera Rubin observatory, and SPHEREx for different assumptions about UCD population properties, Galactic structure, evolutionary, multiplicity, and metallicity, and determine which facilities are best suited for key UCD investigations. 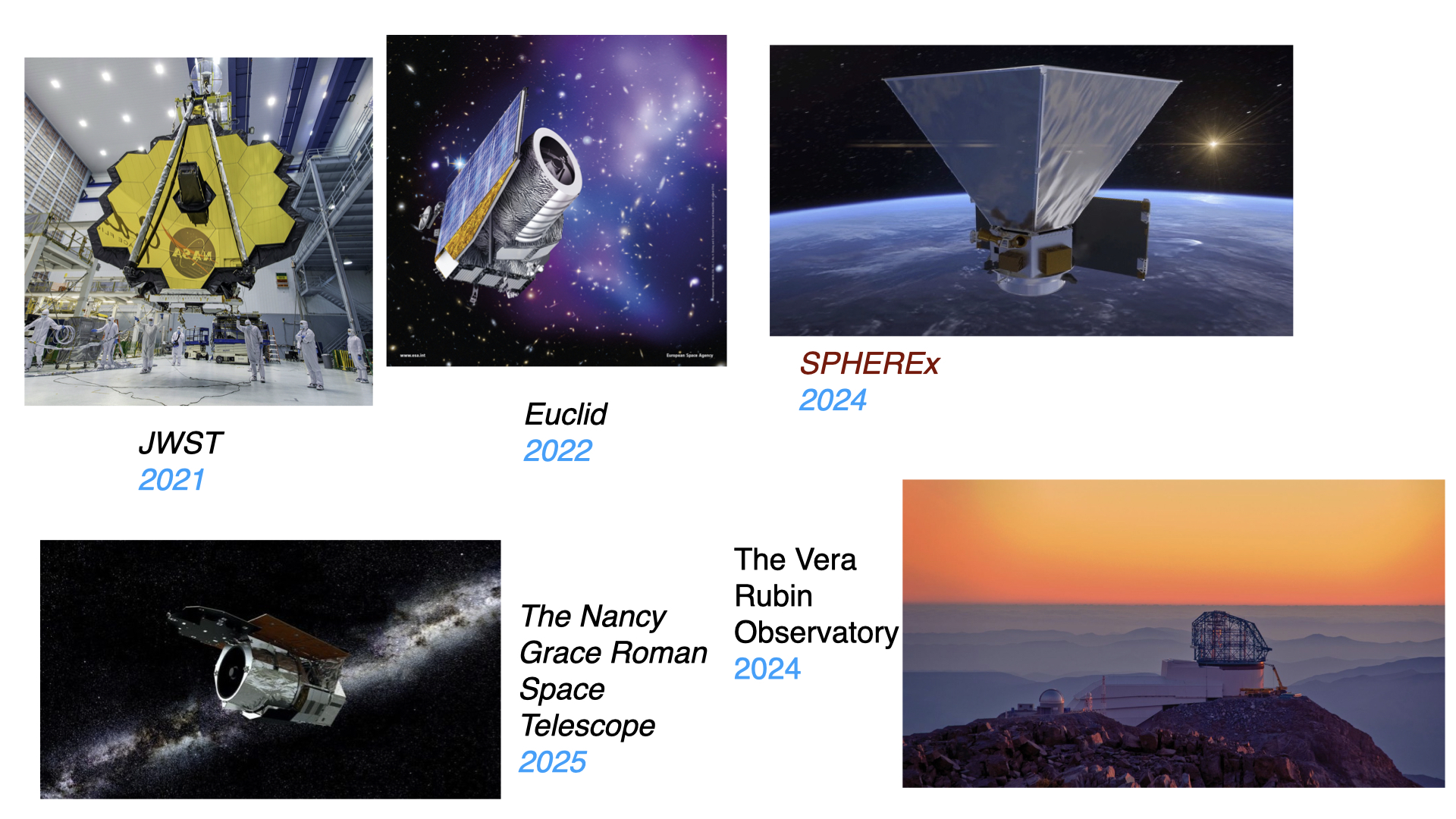 Cosmological simulations that include dark matter predict the existence of low-mass subhalos. These subhalos can perturb thin stellar streams formed by tidal disruption of globular clusters, creating a gap-like feature like those detected in Gaia data (e.g GD-1). I predict the dectability of these gaps in nearby galaxies with the Nancy Grace Roman Telescope. This research is done in collaboration with Dr. Sarah Pearson, Dr. Tjitske Starkenburg and Prof. Kathryn V. Johnston Link to talk Link to poster

This gif shows a simulation stellar stream in our Galaxy being perturbed by a 10^9 solar mass subhalo. It’s made using the Gala code

GJ 660.1AB is a binary system (M1 and M7 secondary) previously overlooked, we showed that the peculiarities in the spectrum of the secondary can be explained by its low metallicity. Link to paper 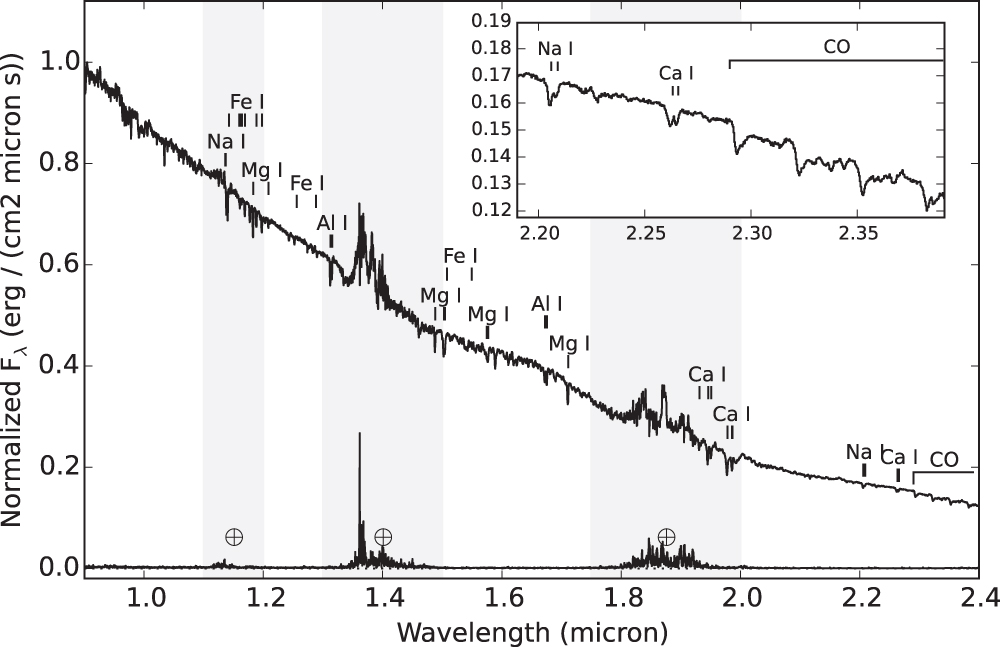